The two hundred and fifty-six acres of Tunbridge Wells and Rusthall Commons have been highly valued as open spaces since the earliest days of Tunbridge Wells’ fame as a spa resort. Unlike most public open spaces, they have never been landscaped or cultivated. So, the Commons represent a genuinely ancient landscape, shaped by human activity over some 6000 years.

The sandstone outcrops which are so conspicuous a feature of Tunbridge Wells and Rusthall Commons were employed as camp sites by Tunbridge Wells’ earliest known inhabitants in the Mesolithic period. These nomadic hunter-gatherers may have been the first to encourage the development of heathland by maintaining open areas through burning in order to attract grazing deer.

The Commons first emerge into history in the eighth century as Wealden ‘dens’ or seasonal pastures for pigs. This is when the name Rusthall first appears. Over the years these seasonal pastures acquired a small permanent population. By mediaeval times, Rusthall had become a manor, with a Lord, Freeholders, and Wastes. The Freeholders or Freehold Tenants were inhabitants who held freehold land within the manor boundaries, although still owed certain feudal obligations. The Wastes of the Manor, known today as the two Commons, were available to the Freeholders for grazing their animals and as a source of natural materials like stone, sand, clay, gorse, and bracken. Another ancient place name besides Rusthall, first attested in the thirteenth century, is Bishops Down, originally the term for Tunbridge Wells Common as a whole.

In 1606 the chalybeate spring that gave rise to the town of Tunbridge Wells as we know it was discovered by Lord North on the edge of Tunbridge Wells Common. The adjacent landowner Lord Abergavenny, whom Lord North had been staying with when he found the spring, obtained permission from the Lord of the Manor to sink the first well on the site for the convenience of visitors.

In 1682 the Manor was sold to Thomas Neale, Master of the Royal Mint, who negotiated an agreement with the Freeholders allowing him to build shops, lodgings and other facilities for visitors on a strip of the Common adjacent to the spring. This became the colonnade which we now know as the Pantiles. The Freeholders received an annual payment in compensation for loss of grazing rights. In 1732, a lawsuit broke out between Maurice Conyers, the new Lord of the Manor, and the Freeholders over the question of continued compensation after Neale’s original agreement had expired. The Freeholders were successful in asserting their rights over the Pantiles site, and the resulting settlement was embodied in the Rusthall Manor Act of 1739 which protected the Commons against any future encroachments.

As Tunbridge Wells developed as a fashionable holiday resort, the Commons came to be seen as more than just a working landscape, since they provided a picturesque backdrop to the organized amusements provided for the benefit of visitors. A racecourse was established on Tunbridge Wells Common from an early date, and in 1801 the popular pastime of donkey riding was introduced.

By the beginning of the nineteenth century, the management of the Commons was in the hands of the Freeholders, who were responsible for regulating the use of the Commons for grazing and other purposes. The growing population of the town put increasing pressure on the Commons, and the Freeholders began to realise that some active policing was necessary in order to “check the many trespasses and depredations that are constantly committed”.

When John Colbran published his New Guide for Tunbridge Wells in 1839, the new regime had made the Commons much more well-ordered, the Freeholders executing “very summary justice on those who attempt to invade their rights”. It is Colbran who tells us how the Freeholders had acquired the nickname of Hogpounders, a term which “although originally applied in derision, is now rather courted than rejected by them”. It alluded to the impounding of offending animals, which were not returned to the owner until a fine had been paid.

The Freeholders made the first deliberate attempts to beautify the Commons, beginning with the planting of Royal Victoria Grove in 1835 to commemorate the visits of the young Princess Victoria. In 1858 they agreed a programme of works for the town’s unemployed including what we called Brighton Lake. It was originally nicknamed Pope’s Puddle after Rev William Pope who organised charitable fund-raising for the works.

In the late Victorian and Edwardian periods, the Commons were heavily promoted as beauty spots in local guidebooks. They were much frequented by residents and visitors, as can be seen from the numerous postcard views entitled ‘Sunday Afternoon on the Common’ which depict crowds sitting on the grassy slopes overlooking London Road. It was imagined as Tunbridge Wells’ equivalent of the seaside. ‘What the ocean is to a sea-bathing town, the Common is to Tunbridge Wells’, as the standard Victorian tourist guide put it. The walk along Mount Ephraim at the top of Tunbridge Wells Common was called the Promenade. The extraordinary rock formations, especially those around the Toad Rock and Happy Valley on Rusthall Common were popular visitor attractions. One Edwardian travel writer declared that “the Toad Rock is to Tunbridge Wells what the leaning tower is to Pisa’.

At the same time, the natural vegetation of the Commons began to be appreciated by the public in general as well as by the dedicated botanist. Pelton’s guide, constantly reprinted from 1871, says: “To our modern taste its natural and wild condition renders it far more attractive than the artificial parks which it is the fashion to provide for the healthful recreation of the dwellers in large cities. The furze bushes and the brake are the most noticeable ornaments; but the whole expanse abounds with other plants and blossoms — ling and heath, chamomile and thyme, milkwort and wild violets, being among the most abundant. In April and May the golden bloom of the furze, which is unusually profuse in this spot, delights the eye, and its rich perfume scents the breeze”.

Grazing of animals on the Commons continued into the early years of the twentieth century – you can see sheep and cattle in virtually every postcard view up to the First World War. But between the wars, grazing faded out, and the numerous ornamental and commemorative trees planted over the years since the early 1800s began seeding themselves to create scrub and ultimately patches of woodland.

By the 1970s, the originally open character of the Commons had been almost entirely transformed. Increasing numbers of self-sown trees, along with a spread of bracken and bramble, had produced a landscape that for the most part appeared to be woodland crossed by a network of footpaths. But it had all happened so gradually that over the years people became accustomed to the Commons’ new appearance.

The vital stimulus that encouraged many to look at the Commons in a fresh way was the famous Great Storm on the night of 15/16 October 1987. Local people awoke to discover that enormous numbers of trees which had appeared to be permanent features of the landscape had met a premature end. The Commons Conservators now had to consider how the damage could be repaired, and in doing so they were prompted to investigate the original appearance of the Commons, using the Museum’s collection of historic views. The Conservators decided to commission the Kent Trust for Nature Conservation to do further research on the history of the Commons, to conduct an environmental survey, and on the basis of these to prepare a detailed management plan. With the help of various experts, both local and from farther afield, an extensive report was prepared for consideration by the Conservators and for public consultation, and its recommendations were adopted by the Conservators in 1992. At the same time, public interest in the Commons had considerably increased, resulting in the establishment of the Friends of Tunbridge Wells and Rusthall Commons in 1991.

Thirty years later, the Commons have a much greater diversity of habitats. The areas of heathland and grassland still survived into the late 1980s have been rescued from encroaching scrub, and many additional areas of open habitat have been restored. Ponds have been restored and brought back to life, and many rock outcrops that had vanished into the undergrowth have been brought back to view. The Commons are in a much more healthy state to support their great diversity of wildlife including over three hundred flowering plants, around one hundred and fifty bees and wasps, many nationally scarce, twenty five butterflies and eighteen dragonflies. Habitat management and restoration are an ongoing process, but we can celebrate Tunbridge Wells and Rusthall Commons as a great success story for landscape and wildlife conservation. 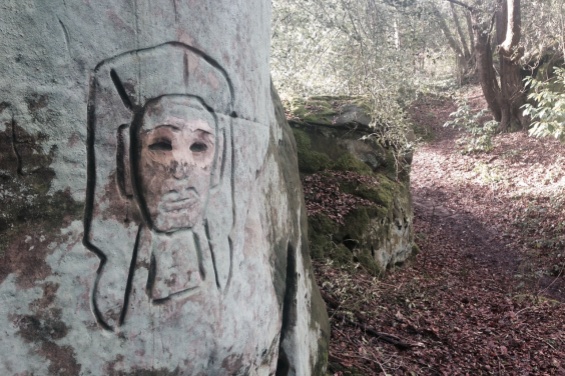 More from the Amelia